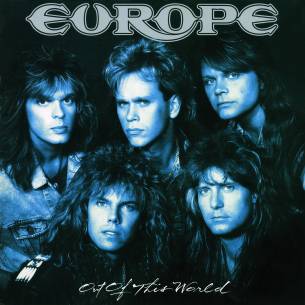 EUROPE 'OUT OF THIS WORLD' CANDY400 Categories: ,

“THERE IS NO question that in 1986 Europe, almost out of nowhere, became undoubtedly the biggest hard rock band on the planet. Their all-conquering hit single ‘The Final Countdown’ shot the band not only to the top of the charts worldwide but also earned them a place in the hard rock pantheon as one of the few groups who managed to appeal to not only rock fans but also to the wider public. It was with this tremendous uplift and, by consequence, pressure, that the band set about recording their follow-up album, a record that cemented not only their position but also their reputation.

But, it wasn’t a straightforward process, as immediately after the release of their breakthrough album lead guitarist John Norum quit the band, forcing them to recruit a replacement. The man chosen was fellow Swedish musician Kee Marcello, a hugely talented player who joined the band on their ‘Final Countdown’ world tour and took a leading role in crafting this follow-up album, ‘Out Of This World’. It was a musical match made in heaven, helping the band to further focus their sound, injecting lashing of copious hard rock energy. Indeed, it sounded like the band had moved heaven and earth to secure their definitive stylistic foothold.

Produced by seasoned veteran Ron Nevison (Led Zeppelin, The Who, UFO), recorded in Olympic Studios London, and released in August 1988, the album thoughtfully condensed their 70s rock influences with catchy and contemporary songs, penned almost exclusively by frontman Joey Tempest. Tracks such as ‘Superstitious’, ‘More Than Meets The Eye’, ‘Ready Or Not’ and the superlative ballad ‘Coast To Coast’ elevated the band to previously un-scaled heights, never once taking their eye off prize.”