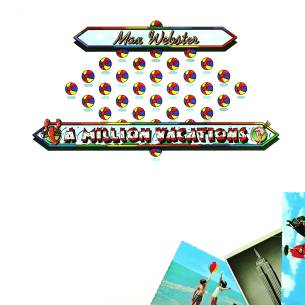 WHEN IT COMES to capturing the imagination and interest of progressive rock fans then Max Webster must surely be one of the successful. Once you get your head around the fact that they weren’t actually named after a real person, so no one in the band was actually called Max Webster, then suddenly all the weirdness becomes acceptable and endearing. It’s amazing to think that at one point the band actually grazed the UK singles chart and appeared on Top Of The Pops, the bastion of British light entertainment.

This was Max Webster’s fourth album, their most commercially palatable album by a country mile, and it’s one that secured them not only a Platinum record in Canada, with three hit singles, but also opened up the international market when they supported Rush on their 1979 ‘Hemispheres’ European tour. The album, in keeping with their quirky unconventional approach, was helmed not by a record producer who was a TV advertising executive and jingle writer. It was actually a smart move as the record not only celebrated their progressive rock roots but also showcased a determined ambition to widen their appeal to a broader market.

Recorded in their native Canada, at Phase One Studios, Ontario, the album contains a number of key tracks; including ‘Let Go The Line’, ‘Night Flights’ and the title track. Best of all though is ‘Paradise Skies’, a triumphant and hugely captivating composition that nearly, but not quite, secured them an international hit. It’s also a record that captured some of band leader Kim Mitchell’s most fluent and impressive guitar solos.