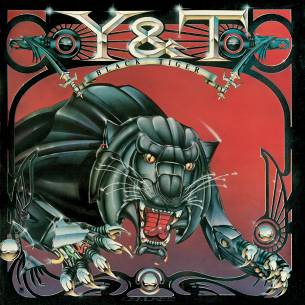 Y&T’S PREVIOUS album Earthshaker had revitalised this highly respected San Francisco based quartet’s fortunes, appearing almost by stealth after years of what appeared to be complete inactivity. Signed to a new label and attracting fresh interest from various corners, Y&T quickly capitalised on their fortunes by moving their base of operation to the UK for the follow-up album Black Tiger. Almost unbeknownst to the band, the UK and Europe had earlier on embraced them as one of their own. It was an appreciation born out of a revived interest in hard rock, fuelled by the emergence of the NWOBHM.

Recorded in the Surrey countryside and produced by acclaimed British producer Max Norman (Ozzy Osbourne, Coney Hatch, Malice) Black Tiger was a triumphant statement of intent, complimenting and, in many respects, eclipsing the achievement of the previous year’s Earthshaker album. Having established a solid template the album saw them looking for more melodic possibilities but not compromising their muscular style. It was a successful manoeuvre and one not lost on their burgeoning European fan base. In fact, during the recording sessions, the band embarked on a sold out UK and European tour that included two nights at London’s Marquee club and a high ranking support slot at that year’s Reading Festival.

Black Tiger, Issued in 1982, is now regarded as one of, if not the definitive Y&T album, showcasing a number of tracks that are regarded as classics, such as ‘Open Fire’, ‘My Way Or The Highway’, ‘Hell Or High Water’, and the title track itself. It also contains the epic ‘Forever’, another gold standard ballad in the classic Y&T canon.