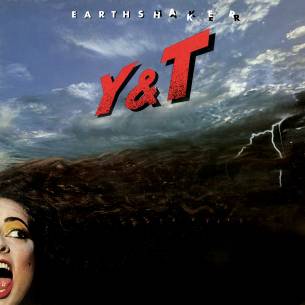 WHEN Y&T reappeared in 1981 and released Earthshaker most hard rock fans were shocked that the band were still a functioning unit. Having made a name for themselves in the late seventies with two fine, but obscure, albums released on the decidedly unhip London label, very little was then heard of them. But when Earthshaker appeared on the rather more happening A&M label, brandishing a streamlined name change from the cumbersome Yesterday And Today to the far more manageable Y&T, fans could not have been happier.

Released in 1981, Earthshaker stunned the hard rock world with its aggressive songs and production. It was a double whammy that breathed new life into the band’s profile, helping to re-establish them as real contenders after years spent hiding in the shadows on a label that offered little in the way of promotion or career advancement. In Europe, where the band had already enjoyed a cult following through imports of their previous two records, the news was embraced with open arms and word soon spread that the band were not only back but sounding bigger and better than ever.

Recorded in their native San Francisco, the album harnessed a new raw energy, allowing songs such as ‘Hungry For Rock’, ‘Dirty Girl’, ‘Squeeze’ and ‘Hurricane’ to explode like molotov cocktails, whilst the epic and lengthy album closer ‘I Believe In You’ showed that the band could write anthems equal to the best of the genre. It also showed just how masterful they had developed as musicians, especially Dave Meniketti’s extraordinary vocals. Honestly, we can’t recommend this album highly enough.