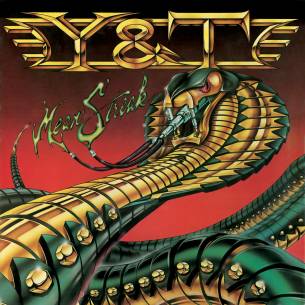 WHEN Y&T, THE hard rockin’ San Francisco quartet, signed to A&M records in 1980, it signalled a golden era for the band, revealing a fan base in the UK, and Europe in general, that they were utterly unaware of. Their debut major label album, Earthshaker, was more successful in Europe than in their own country, building an audience that was hearing much in common with the NWOBHM and welcoming their hard edged sound as if they were homecoming heroes. The bond was further cemented when the band elected to record their Black Tiger album in the UK, and also attracted an impressive reaction when they toured, which included a special guest performance at the coveted Reading Festival.

It came as no surprise, then, to find that their next album continued the British connection, with the band securing respected studio wizard Chris Tsangarides (Thin Lizzy, Judas Priest, Ozzy Osbourne) to produce Mean Streak, another molten slice of face melting hard rock in the finest Y&T tradition. Recorded in their native San Francisco, the record continued to enhance the band’s reputation as one of the most potent outfits of the era, delivering great songs and incredible performances. They refused to sweeten their sound or kowtow to ill informed suggestions, stated or implied, to become more accessible.

Produced with pin-point accuracy, the album (issued in 1983) resonates with explosive authority, harnessing razor sharp guitar riffs and impressive songs. Tracks such as ‘Midnight In Tokyo’, ‘Hang ‘Em High’, ‘Down And Dirty’ and the title track itself are all Y&T classics, allowing vocalist Dave Meniketti to ride the tiger with all his might.